Olympic Park from the air

Following on from last week’s post about my visit to The Orbit, I thought it’d be nice to post a couple of other views of the Olympic Park that I’ve taken recently.

First up is an aerial shot of the park that I took on a recent flight back into London. We flew in early on a sunday morning, and were lucky enough to have a fantastically clear view of the city, including flying right over the Olympic Park. 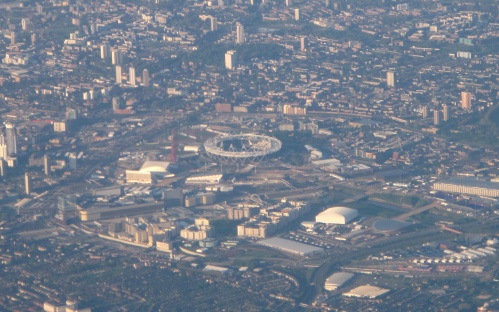 The Olympic Stadium itself is in the centre of the photo, and immediately to its left are the Orbit, Aquatic Centre and Water Polo Arena. Towards the bottom left of the photo is the Olympic Village. To the right of the village is a large, white box which is the Basketball Arena; to the right of that is the curved roof of the Velodrome, probably the most attractive of all the Olympic venues. To the far right of the picture you can just about see the Hockey pitches, right in front of the huge International Broadcast Centre.

You can get a clearer picture of the park’s layout from my second photo, which is a model of the Olympic Park, part of New London Architecture’s huge model of Central London (which is well worth a visit if you’ve never been). This photo is oriented with the southern end of the park (the Olympic Stadium) to the right, and the northern end (with the Velodrome) to the left. 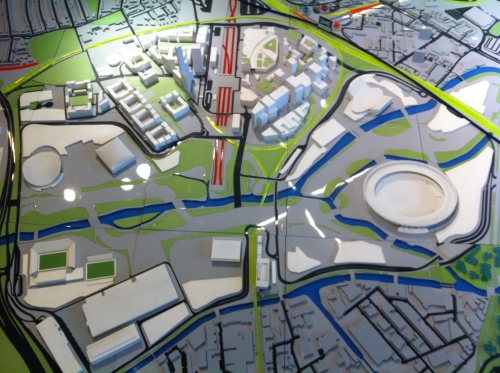 You can see the rest of my Olympic photos here.

Looking down on the Olympic Park from the Orbit

Earlier today I was incredibly lucky to be one of the first people to go up the Orbit. Even before the Olympics has started, it’s already become one of the most recognisable structures in the Olympic Park, and is no doubt soon to become familiar to people around the world, as it’s bound to feature prominently in TV broadcasts from the park once the games begin (especially as there aren’t that many spectacular buildings in the park). 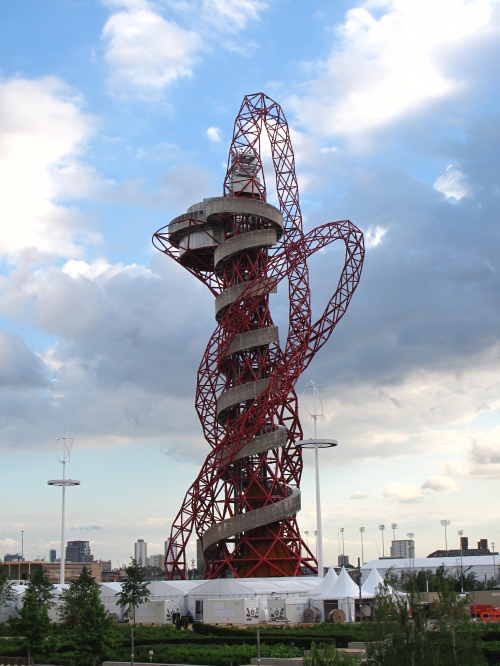 The Orbit from inside the Olympic Park

Getting in was no different to the procedure that would be familiar to anyone who’s been to a test event in the park recently – arrive from Stratford, and cross the road to go through the efficient and friendly airport-style security. Once through it was a short walk in between the Aquatic Centre & Water Polo Arena, over the river via footbridge, and there it was. 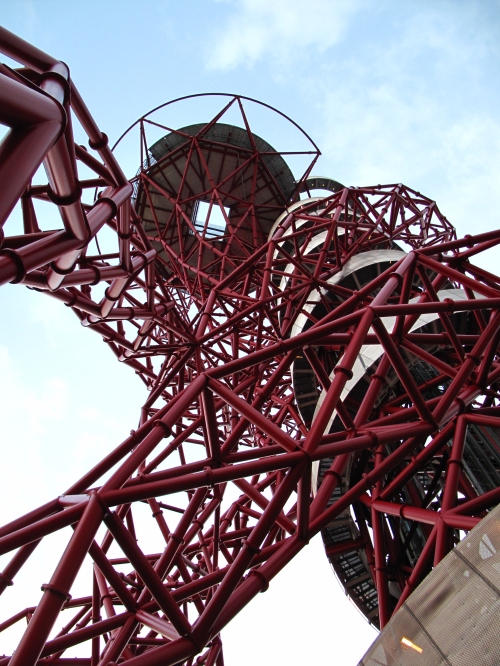 The biggest surprise on arrival is that there’s a strange rusty iron bell hanging out of the bottom (the Guardian’s art critic described it as an arse – I can’t see it myself). Just behind that is a little structure that contains the lift the whisks you quickly up to the top.

Looks more like a bell than an arse to me, but then what do I know, I’m not an art critic

On reaching the top I was delighted to see that you can actually get outside into the open air, with two little balconies on either side, one of which has great views right into the Olympic Stadium next door – good enough that we even got a little sneak preview of the opening ceremony, as we could see a little grassy hill with a tree on it at one end of the stadium (you can read more about that, and see where the tree will sit here). 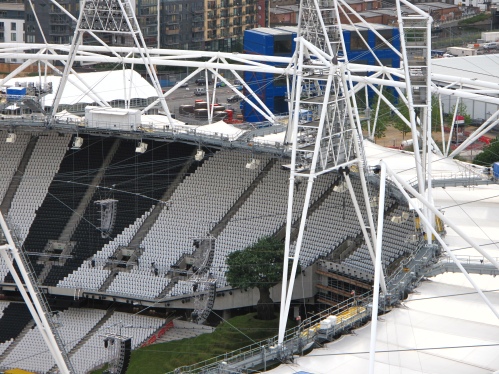 The viewing platform itself is lovely – wide and spacious, with fantastic views on all sides. We were lucky enough to have clear skies tonight (especially given how grim the weather has been recently), so we had clear views all the way out to Wembley and beyond. In fact, with the O2, Excel, and Wembley all in sight you can see almost all of the major games venues from up here. 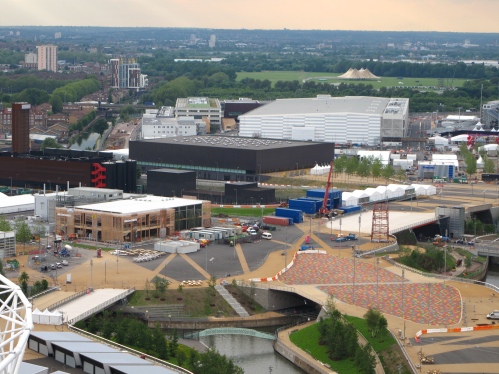 The world’s largest McDonald’s, in front of the (L-R) Energy Centre, Copper Box – aka Handball Arena – and International Broadcast Centre

The platform also had one other surprise – inside are two other Anish Kapoor sculptures, huge curving mirrors not unlike the C-Curve mirror that was in London’s Kensington Gardens in 2010. 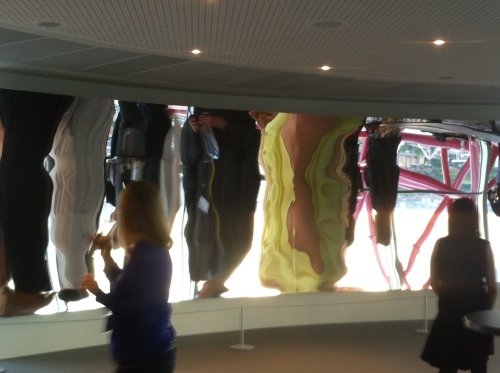 One of the two mirrors inside the viewing gallery

The biggest surprise of the day was how it changed how I feel about the sculpture. Beforehand I really couldn’t make up mind about it. Now I’ve been up, I’m a total convert. To see it at close hand, from underneath, from above, from inside, and from the stairs on the way down, is to experience it totally differently from seeing it from far away. The shape curves and twists in different directions, giving a different view from every angle. It’s incredibly solid but incredibly lightweight at the same time, with the slender struts leaving plenty of room for views in between. 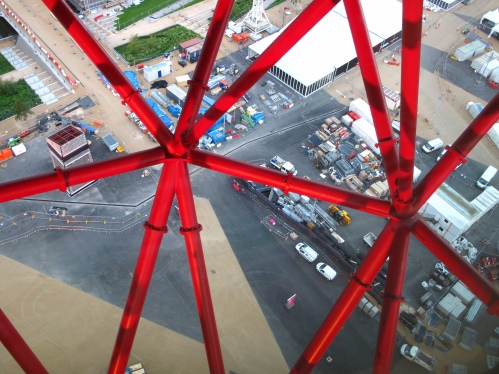 Looking down on the Olympic Park from inside the Orbit

Most people I’ve spoken to up til now have been pretty ambivalent about the Orbit, if not downright hostile. Based on tonight, I reckon that’ll change pretty rapidly. It may look like a big red squiggle, but close up the structure itself is fantastic, and the views even better, and I think Londoners are soon going to grow to love it.

You can see my full set of pictures of my Orbit visit here.